Our last “Club” Race in a unique year!

Quite a few “apologies” due to injury, etc, and “that time of the year!”

New Member – Philip Ward – changed craft “at the last minute”, and paddled a Stellar sea kayak – not his usual V1 (an OC1 without a rudder!) – first time over this distance – and was lucky to hold out the fast finishing Marg Cook, in her single SLR by a “nose” – a PB!

Nathan Podlich managed a respectable time, despite a break of a couple of months.

John Wood had one of his best times for a while, to win by a clear margin, from Nick Naughton  and Peter Walker.

Mick had a physical problem, so just did the 7.62km. Still achieved 11km per hour!

Marg and Rob both won a Prize in the Lucky Draw, along with Peter Walker.

A “Special Thank You” to our Timekeepers, Diana and Margaret, who have looked after us this year, and “kept us safe!”

See you at the AGM and “End of Year!” 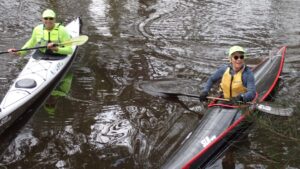 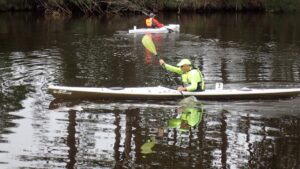